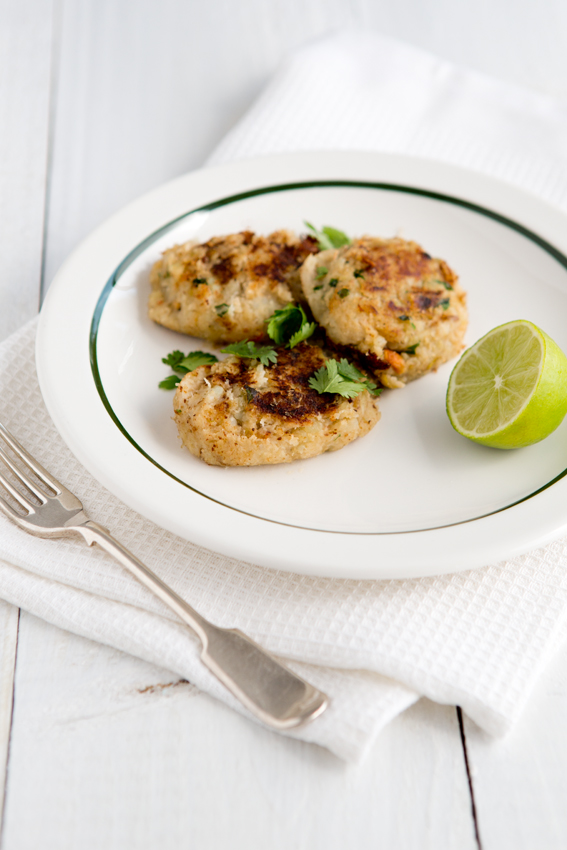 This recipe has become a fav recently, though it has taken me a little time to get the balance of taste and texture just right. The distinctive flavour of the crab, combined with the subtle sweetness of apple. It might sound a bit crazy but the two really do work well together.

I went through a fair bit of trial and error before settling on the final recipe for these crab cakes. My main concern was that the flavour of the apple would be lost when combined with the crab, but, as I discovered, provided the apple you use has a real depth of flavour, such as Cox’s Orange Pippin, you will be able to taste it, albeit subtly.

As luck would have it, Cox’s Orange Pippins are in season this month! If you can’t get hold of the Orange Pippins then any other variety of apple with a firm texture (not floury) and a good strength of flavour will suffice.

The other important point to note is that it’s crucial to remove as much juice from the grated apples as possible or your mixture will just be too wet to form successful fishcakes. Once I’d grated my apples I used a muslin bag to squeeze out as much juice as I could.

Ideally you should make the crab cakes the day before you plan to eat them – they will hold together better if they’ve been left to chill in the fridge over night.

1.) Peel and chop the potatoes, add to a pan of salted boiling water and cook for about 15 to 20 mins, or until tender.
2.) Drain the water from the potatoes and then add back to the pan, add a pinch of salt and pepper and mash.
3.) Add the mashed potato to a large bowl with the crabmeat, grated apple, the grated zest of the lime and half its juice, the chilli and the coriander. Mix until all the ingredients are well combined.
4.) Line a couple of baking trays with greaseproof paper or tin foil and set to one side.
5.) Divide your mixture into portions, shape into patties in the palm of your hand and then place on the lined baking trays. (Dust your hands lightly with flour if the mixture is sticking.)
6.) Chill the fishcakes in the fridge overnight.
7.) When you’re ready to cook, add a tablespoon of olive oil to a frying pan and place on a high heat. 8.) Add the fishcakes to the pan in batches, frying each for about 6-8 minutes, turning halfway, or until they have lightly browned on both sides. Because of the apple, these fishcakes are moister than a lot of recipes so they won’t go ultra crispy. Try to resist the temptation of repeatedly turning your fishcakes; they’ll hold together better and develop a richer brown colour if you’re brave and turn them just the once!